I just finished John Fowles novel “A Maggot.” It’s an incredible work, set in 18th century England. It begins with objective narration, giving the impression of a movie camera tracking “a forlorn little group of travellers” riding across the landscape. The narration shifts, taking the form of legal testimony, periodical clippings, omniscient narration. The 20th century author occasionally inserts himself but mostly reserves his thoughts to frame the beginning and end of the book.

A maggot, of course, is the larval form of a fly. But in the 18th century it also meant a dance tune without title and tracking a theme. The novel is the latter. And, perhaps, the former, in some senses. Fowles riffs off his beginning image. This is one of those stories that stayed with me when I put the book down. The characters and story were vivid.

I came to Fowles through John Gardner, another of my favorite writers (“Grendel” is an incredible telling of Beowulf from the monster’s perspective). It didn’t take me long to get hooked.

There are so many books, movies and CDs out there that it’s impossible to sample everything you might be interested in. I found a pretty cool site called Gnod that makes it a little easier to narrow the field.

In a nutshell, it surveys what people like, and then it tries to assemble lists of what you might like based on the preferences that other people have cited. It’s similar to Amazon (and they appear to have some sort of unholy alliance with the weasels at Amazon), but this is much cooler. I really like the graphical representation that it produces to show you the relation of other works to the one you cited. Here’s an example of three that it created for me, based on the item that I told it I like:

Night of the Living Dead

It’s not completely accurate, but it’s a pretty cool toy. It also came up with a few suggestions that I’ll check out.

Rolling Stone has a great piece on the 30th anniversary of Pink Floyd’s Dark Side of the Moon, complete with continued animosity between David Gilmour and Roger Waters, an interview with Alan Parsons and a rambling 1971 discussion with madcap Syd Barrett, including a quote from one of his songs, “Wolfpack”, that seems somehow oddly strangely appropriate while dogwoods bloom in Knoxville and bombs burst in Baghdad.

The Life that was ours grew sharper

And stronger away and beyond

Imagine being able to direct sound like a laser beam. You walk past a Coke machine, and hear ice plunking into a fizzing glass. Like a voice in your head. From a source beamed directly at you. It apparently works up to 450 feet with no loss of volume or quantity, and it has the potential to make conventional speakers obsolete. With stuff like this, we wouldn’t need to invade countries that irk us. We could just beam Great White or REO Speedwagon at their leaders until they either do what we want or turn into quivering blobs of Jello. Very cool …

Make sure to read the entire story. The guy who invented this is fascinating and has a great track record. 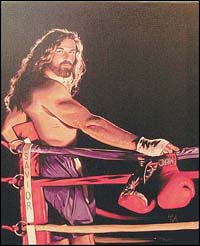 Just when you think you’ve seen it all, you stumble across something like this on the Saturday religion page. Yes, it’s for real. The artiste calls it: “Undefeated.” But I like my title better. Hard to picture the son of god duking it out with Mike Tyson. Poor guy would turn the other cheek only to have Iron Mike bite his ear off. I also love the anglicized characterization of this Jesus. You’d never know this Heavyweight Champ is a Jewish dude from the Middle East …

Tap Jesus on the chin to see a bigger version. (Don’t worry. He won’t swing back.)

If you want all the gory details, read about it here.

And if you want to see a lot of other really cool Jesus pics, check out Jesus of the Week.

I let my subscription to The Nation lapse a few years ago when I realized I just didn’t have time to read it any more. If it keeps publishing items like this, I’m going to have to make time.

Sign on the Jumbotron at a recent Nashville Predators game:

“Warning: Pucks may enter the seating area at a high rate of speed.”

That caution would apply to many things in life …

The “cellblock” of Section 303. Apparently, the fans in this section built their own web page and advertise it in a sign above the section, but apparently they’ve merged with another fan group and the page pushes you through to that page. Cool grass roots fan support.

But alas, the Predators were defeated by the ugly and untalented St. Louis Blues.

Happy Ides of March. Check out this great site on Julius Caesar if you want to read up on Brutus’ victim. Particularly good are the timeline and introduction

Found a very cool piece of software recently called GuruNet. Once you’ve downloaded it, you can alt-click on any word, in any file, Web page or document and it will pull up a dictionary entry on that word. It also searches the Net and provides you with an array of other information on the word, ranging from thesaurus entries to translations to other languages and general search info. I generally use dictionary.com for this, but it’s distracting to have to jump to another window in another browser, look up the word and then come back. GuruNet brings the info to you, plus an array of other info. Very useful. I’ve been demoing it for about a week now and just broke down and paid the $34.95 to get a legit copy. Worth every penny. You can download a demo version of it to try out. Go ahead. Give it a shot. I dare you.

As we neared the end of an hour and a half hike at the lake the other day, Xena was starting to sag. Ozzy, of course, was still in top form. He was circling the poor lumbering Newf, nipping her heels, biting her ears and tugging at her flanks. As we crested the last hill and the Clinch River came into view below, Xena broke into a trot. Ozzy didn’t relent. Then Xena fell into a full stumbling run, heading for the water. She hit it with a mighty splash, leaving the nuisance pup on the shore (he’s afraid of the water and won’t go in). It reminded me in the most hilarious way of a cartoon where someone is being chased by bees and charges into the water to escape. Xena stood out in the chest deep river for several minutes before she finally waded ashore, climbed up into the truck and stuck her head out the window to enjoy the smells and sights on the way home.