That silver tray. Next to the fabulous Ricardo Cate’ artwork. 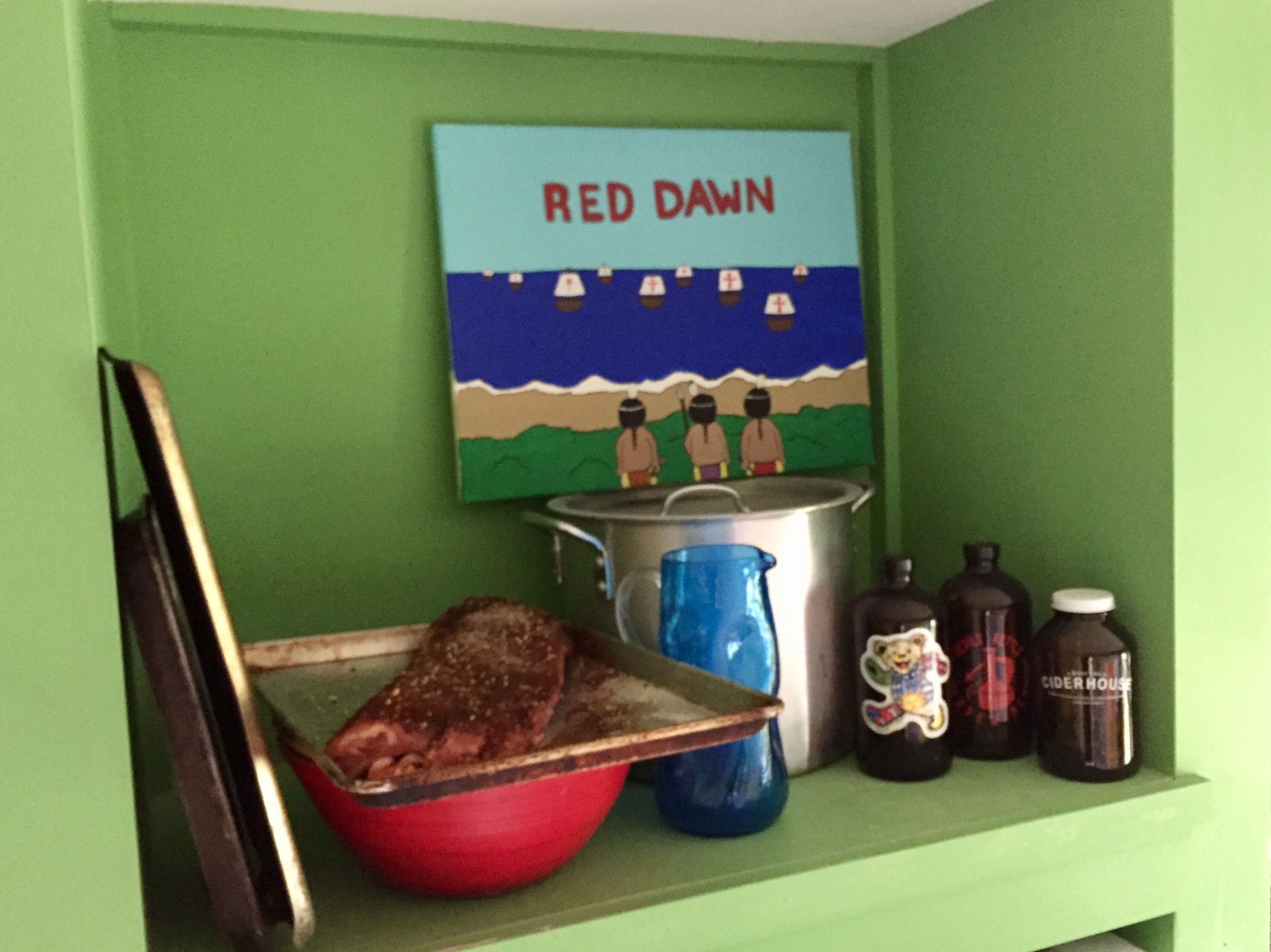 A closer look reveals … a beatific rack of ribs, bristling with spices. 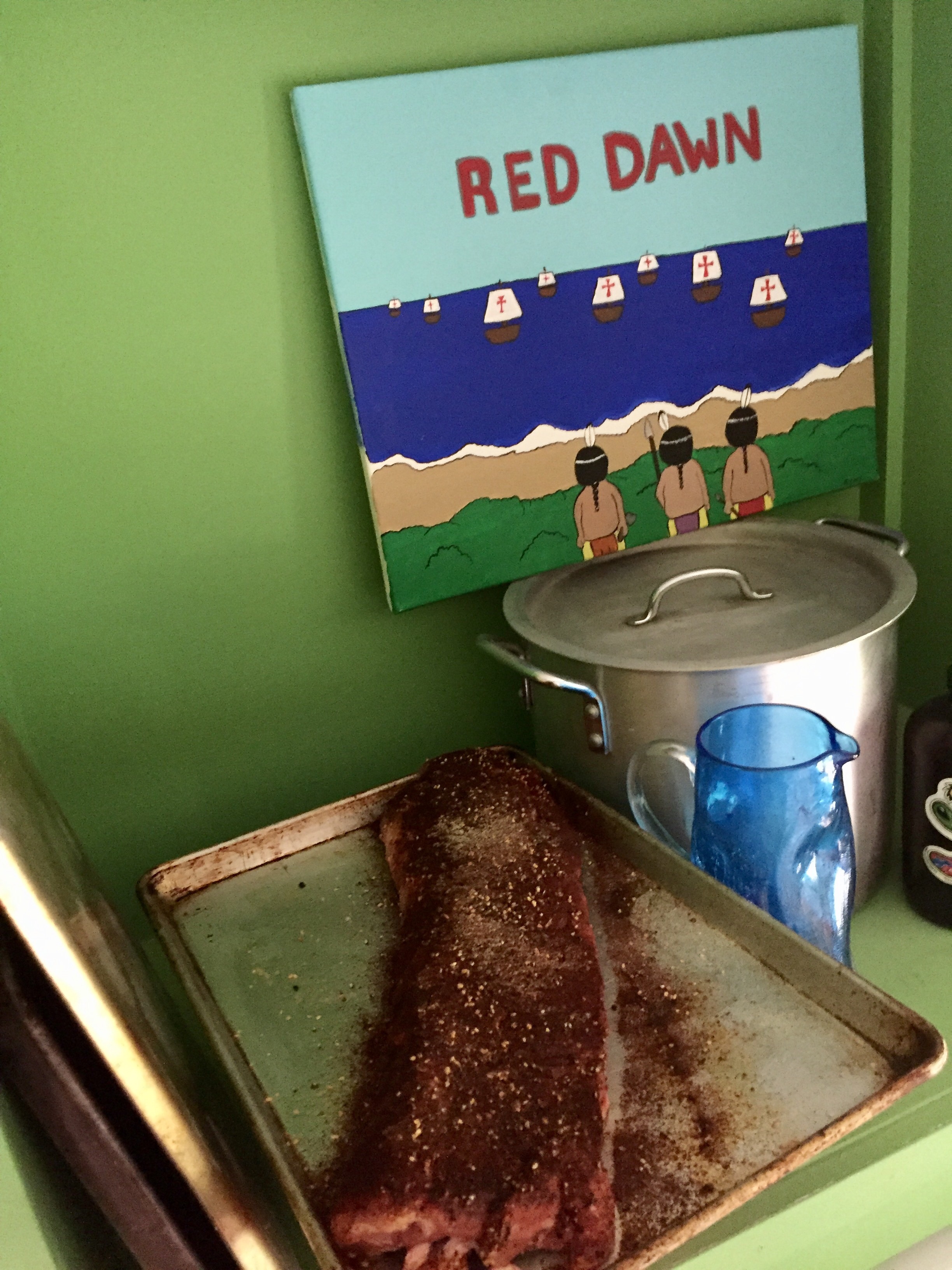 Yup. Ribs above the fridge. WTF? 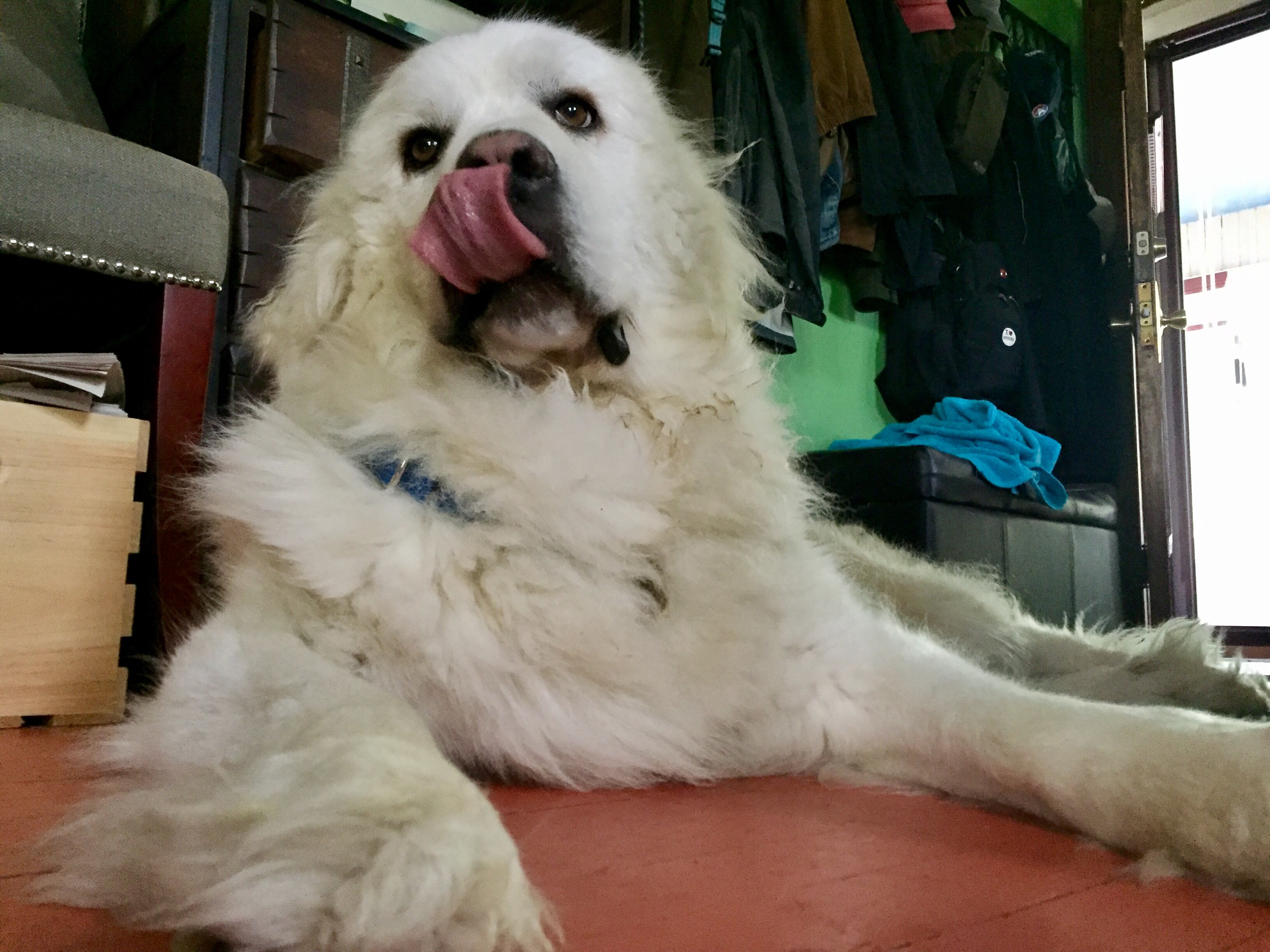 We again have a creature capable of looking our meat eye-to-eye when it’s sitting on a table of non -large-breed-scale. We already lost a tenderloin to this magnificent beast. Never again.

When Nelson Rockefeller commissioned Diego Rivera to create a mural for Rockefeller Center, he wasn’t expecting Vladimir Lenin to make the scene. And when Rivera included Lenin in the work, Rockefeller came unglued, demanding that Lenin be excluded. Rivera offered to add Abe Lincoln as a compromise. When that didn’t appease Rockefeller, the mural was covered and eventually destroyed.

Diego did another version (above) at the Palacio de Bellas Artes in Mexico city, which I got to see last time I was there. Diego enhanced the new version, adding other famous Communists and Nelson’s father, John. Very amusing dig at his capitalist nemesis.

The Mexican Cultural Institute here in D.C. has an exhibit called “Diego Rivera’s Man at the Crossroads.” It’s a fascinating history of the work and the controversy. There aren ‘t many original documents here. It’s mostly facsimiles and copies. There isn’t even a color photo of the original. All that’s left are black and white images that Lucienne Bloch managed to shoot before the destruction. But it’s a fascinating look at the controversy, and it also served as an introduction the cultural institute itself, which features a sprawling, three story mural by Roberto Cueva del Rio and a room done in beautiful Talavera tile.

I particularly liked the historic photos in the exhibit and enjoyed the inclusion of correspondence related to the controversy. The poem “I Paint What I See” by E.B. White also was very amusing …

‘I paint what I paint, I paint what I see,
‘I paint what I think,’ said Rivera,
‘And the thing that is dearest in life to me
‘In a bourgeois hall is Integrity;
‘However . . .
‘I’ll take out a couple of people drinkin’
‘And put in a picture of Abraham Lincoln;
‘I could even give you McCormick’s reaper
‘And still not make my art much cheaper.
‘But the head of Lenin has got to stay
‘Or my friends will give the bird today,
‘The bird, the bird, forever.’

Definitely stop by to see this if you have time. There will be a lecture on Thursday, Feb. 20 that I hope to attend, and the exhibit runs until May 17.

Joan of Arc at Meridian Hill Park, a photo by Suffering the Benz on Flickr.

Ozzy and I talked up to Meridian Hill Park yesterday, where we found Joan of Arc looking down on the District from the top of the hill. Wikipedia alleges this is the only statue of a woman on horseback in D.C. Meridian Hill Park also has a great Dante statue and a tribute to James Buchanan.