Our home had become a disconnected, cacophonous jumble of music-playing gadgets that was making me crazy (or, more accurately, crazier).

We have three full stereo systems (living room, TV room, workout room), a Bose radio knockoff on the porch and an Ubuntu-driven  computer playing Internet radio  in the dining room. 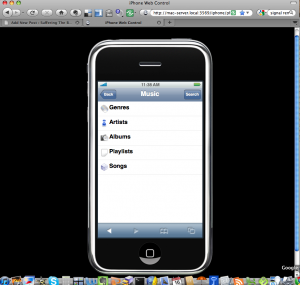 What I wanted: A network that would allow me to play all of the music on my half-terabyte hard drive in the loft throughout the house, including Internet radio. A critical component of this is the ability to control what’s playing from anywhere in the house. That turned out to be the tough part.

I first downloaded the Rowmote app from the iTunes store. Good little app, as far as it goes, but it doesn’t allow you to pick songs, choose radio stations, etc. After searching around a bit, I stumbled across the much pricier ($24.95) Signal app. They let you try it free (the demo version is fully functional, but “please register” appears for every third title in your media library).

In installed it on the server in the loft that runs my music library. It provides an address on my local network that I can point iPhone, iPad and computer browsers to so they can control the library.

It worked really well. So well that I paid for the app and am happily using it. I’ve bookmarked the address on our phones, computers and iPad to make it easy to call up the control, which is an HTML driven interface that looks like an iPhone. Pretty easy to use. A bit kludgy at times. But coupled with a few AirPort Express Base Stations (about $99 each) I can let my iTunes media library roam the house freely. If I want to listen to something different, my phone, computer or iPad works as a remote to let me sift through my music collection and pick something new.

The main drawback: It won’t allow me to pick the speaker source in the iTunes library in the loft. I have to go up there to dictate which speakers are playing. I solved that by having iTunes play to all the speakers in the house. Since the stereos are off if I’m not listening to them, it really doesn’t matter that the music is being output to all of them. I hear it only on the stereo that’s powered up.