In a recent Wall Street Journal Saturday essay, Will Schwalbe made the case for reading.

“At the trial in which he would be sentenced to death, Socrates (as quoted by Plato) said that the unexamined life isn’t worth living,” Schwalbe wrote. “Reading is the best way I know to learn how to examine your life. By comparing what you’ve done to what others have done, and your thoughts and theories and feelings to those of others, you learn about yourself and the world around you.“

On one hand, it strikes me as odd that one would feel compelled to make a case for reading. But I’ve spent the past three years trying to teach journalism students to write. And the students who struggle the most share a common trait: They don’t read. Not in any meaningful way, at least. They think in 140-character skirmishes instead of book-length arguments. Nothing wrong with the former. I envy that skill. But it shouldn’t preclude the latter.

Schwalbe went on to cite works that were seminal in his development, from “Stuart Little” to “The Gallic War” to “The Girl on the Train.” It got me thinking about similar touchstones in my reading experience. 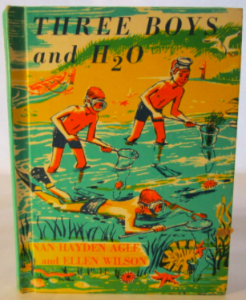 I had to think about this for a while, and after excluding the “Dick and Jane” primers., I think it was a 1968 title called, “Three Boys and H20.” At least, it’s the first one I remember reading. There was a blur of Hardy Boys and Hardy Boy knockoffs I plowed through. But I remember being fascinated by the H20 book. Definitely the first strong recollection I have of geeking out on books. It was some sort of beach/adventure/detective story that I unearthed at the Swissvale Carnegie Free Library, which struck me as the coolest place in the world when I first entered it. Mom turned me loose, after a stern warning to behave, and I started exploring the stacks. I emerged with some great books. It makes me realize how important a role my parents played in encouraging my reading. Trips to the library. Encouragement to order from a book club at St. Anselm Elementary School. And the world at our fingertips, thanks to the World Book Encyclopedias Mom and Dad bought us (I could do a whole post on how damned incredible and influential those books were on me and my brother when we were kids, especially the entry that boasted a cellophane overlay of a frog, allowing you to see its innards and skeleton and skin in separate layers as you flipped each one back into place. This was our Internet in the late ‘60s and early ’70s.) 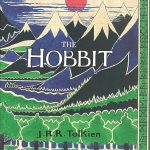 J.R.R. Tolkien’s epic introduction to Middle Earth. My fifth grade teacher at St. Anselm, Mr. Brannon, read sections of the book to us in class. I took it out of the library and read it, struggling in spots but completely enthralled by Tolkien’s hobbits. From there, I moved through Twain and Edgar Allan Poe at Mr. Brannon’s urging. He’s the first teacher I was completely smitten with. I remember how crushed I was when I moved on to sixth grade and didn’t have Brannon any longer. Other great teachers were around the corner. But he was my first. 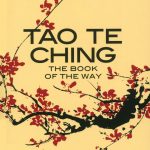 This one is interesting since I tend to hate business books, which rules out most of them. Instead, I’d argue the Tao Te Ching is the book that’s most influenced my thinking about work, particularly relating to building teams and interpersonal dynamics. At the risk of grossly simplifying Taoism,

one of the tenets I take away from it is that things have a nature, and trying to get them to behave in a way that’s contrary to that nature is a study in frustration. Figure out how to make the tiger use its power for good, in other words, rather than trying to turn it into a osprey. That might be why the one business book I routinely recommend is Good to Great by Jim Collins, particularly his discussion of how to get the right people on the bus and play to their strengths rather than setting them up to fail.

This sounds weird, even pretentious, but book therapy for me is tackling something ridiculously over my head, something I study and scrutinize without passing up the opportunity to glide through a beautifully built paragraph the way a snowboarder slices through powder. I gnaw at these books, sometimes taking months to read them. I read Joyce’s Ulysses over a series of weekends while sitting in my jetted tub in Knoxville, TN. And when I ran away from a mistake-job in Las Vegas, I opened Infinite Jest and let David Foster Wallace whisper in my ear as I fled home the long way, pointing my truck north to Missoula, where I communed with college bud John Baker before jumping back in the truck, this time with his son, Luke, in tow, and rambling back to Tennessee via New Mexico’s Jemez Mountains. Each night during that trip, I secured a pair of crap hotel rooms, one for me and one for Luke. I’d lay awake reading Infinite Jest, trying to dislodge the highway buzz from my head only to replace it with a completely different hum — that underwater static that dogs you for days after seeing a heavy metal band shred a stack of Marshall amps. But instead of a Judas Priest assault on the ears, this was a postmodern assault on the brain. 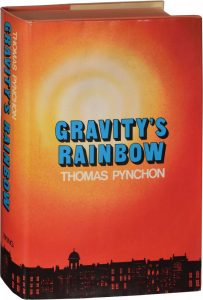 Right now, I’m trying to parse Thomas Pynchon’s Gravity’s Rainbow, a paranoid, frenetic take on consciousness and freedom and decay that seems wildly appropriate in Trump’s America. The first time I tried GR I bounced off. Hard. This time, I set up a Slack channel and talked a bunch of folks into climbing aboard for the read, but it became a study in herding cats who had too many other mice to chase. Now I’m reading it solo in chunks. On planes. On rainy mornings. And using “A Gravity’s Rainbow Companion” by Steven Weisenburger as a roadmap through the contrails and rubble. In my initial summer-fueled zeal, I even managed to make a lengthy post about the first section. Then school started and my mice — about 50 amazing millennials at the Scripps School of Journalism — kept me too busy to make much progress. But winter break looms. And Slothrop is wandering post-war Europe incognito, parading as English war correspondent Ian Scuffling, dragging me along with him …

Being a better friend

Overall, I’m a crap friend. Terrible at staying in touch. I ghost. I embrace the Irish goodbye. Always have. So I’d argue the books I’ve encountered haven’t done me a lot of good here. But I am finding some wisdom in the magazine feature writing class I’ve been teaching this fall at Ohio University. In the course of 16 weeks we’ve read longform masterpieces by George Saunders, Karl Ove Knausgaard, Kathryn Schulz, and Emily Nussbaum. We read a Mother Jones investigative piece that provided a horrifying, inside look at how a private prison is run in Louisiana. We met a Maine hermit, eavesdropped on a woman as Alzheimer’s slowly wrapped her mind in gauze, wandered the cluttered apartment of a man who died alone and unclaimed in New York City. And through all of these incredible tales, one theme has been consistent: that burning need to “only connect,” as E.M. Forster would have said. How do we carve through these complex masks we wear to get to the real person beneath, to truly connect. It ain’t easy. And a lot of people bounce off it. But when it happens, it’s the star-thrumming Milky Way on a black New Mexico evening. Piñon breeze. High desert swirling into a starry night worthy of Van Gogh.

If you’ve gotten this far, post a comment on the books that influenced you the most. I have a feeling that being well-read will be critical during the next 4-8 years …

One reply on “These books I have shorn against my ruin: from hobbits to Pynchon to the Tao”