Woodworker, a photo by Suffering the Benz on Flickr.

We had several more great tastes of D.C. culture this weekend, starting with Shakespeare’s “Merchant of Venice” on Saturday and culminating with an exhibit of Buddhist cave art today. 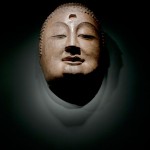 The Shakespeare Theatre Company’s production of “Merchant” was awesome, setting the play in 1920s New York City’s Lower East Side. Great production. On Sunday, we checked out a 3D exhibit of Buddhist cave art from China at the Smithsonian’s Sackler Gallery. We also took the opportunity to browse the permanent collections at the Sackler and Freer galleries, which are connected by an underground walkway.

And there’s always something going on on the National Mall. Before visiting the Sackler, we stopped for West African food at a booth at the Folklife Festival on the National Mall. Afterward, we drifted around the various booths highlighting Colombian artisans, including the woodworker in the photo above.

What an amazing place to call home …