One of my favorite moments in Flannery O’Connor’s fiction comes at the grisly finale to “A Good Man is Hard to Find.” The Misfit has just killed a grandmother in cold blood, prompting his cohort to note: “She was a talker, wasn’t she?” 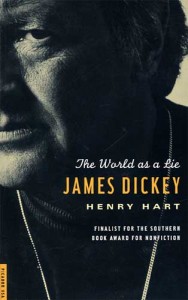 “She would of been a good woman,” the Misfit says, “if it had been somebody there to shoot her every minute of her life.”

After finishing Henry Hart’s impressive biography “James Dickey: The World as a Lie,” it strikes me that Dickey had a lot in common with that grandmother.

The truth, no matter how painful, dangerous or even mundane, is often a terrible thing to confront. The only way some people can grapple with it is when their very existence is at stake.

The Dickey in Hart’s biography is a brilliant poet with a remarkable mind. He’s also a bloviating racist misogynist alcoholic asshole who lives a life of lies.

It takes a brush with death to force him, like the grandmother, to start rethinking the world of lies he inhabits.

Hart notes that Frank Zoretich (who happens to be a longtime friend of mine) interviewed Dickey shortly after a major surgery that put a considerable scare into Big Jim.

“Nobody who’s come back to life can have greater incentive to enjoy just getting out into the sunlight, just walking around talking to people,” Dickey tells Zoretich. He also starts to tell the truth. He concedes he’s not the rugged outdoorsman he claims to be. He starts to deconstruct the “Hemmingwayesque myths” he wrapped himself in.

But it lasts only a short time. Once the gun is no longer pointed at him, Dickey pretty much returns to his lying. Hart argues much of it is by design. And clearly it is. Dickey sees the poet as a godlike force that creates reality rather than just reflecting it. He sees no problem in creating a gumbo of reality, fantasy, myth and fabrication in his art and in his life. But by the end of the biography, it’s clear this is more a compulsion than some sort of artistic Tao. Dickey’s a liar. Plain and simple.

Hart doesn’t flinch from showing us a Dickey that could give Mel Gibson a run for his money when it comes to racist and anti-Semitic rants. But he tends to downplay it, claiming it was for shock value more than echoing core beliefs. Bullshit. Having an African-American maid who likes you doesn’t exonerate you for repeatedly making statements like this one (which he said in front of one of his classes):

“Don’t you agree that niggers smell worse than we do?”

There is a good Dickey. The one who was a gifted and supportive teacher. The man who wrote Deliverance. The poet who carved words into something that could leave the reader overwhelmed and breathless. But that Dickey proves difficult to find in Hart’s book.