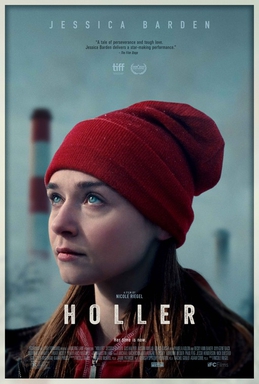 I saw the film Holler with my friend Laura recently as part of the From the Hills and Hollers film series. It’s an incredible movie. We were so floored that we sat there as the audience drifted out of the theater, credits rolling, lights still dim, talking about it, processing it. I think we were the last two people to get up and leave our seats. I asked, “Why is it called Holler? It’s not about some backwoods Appalachian place where coal miners retreat each night to lick their wounds, drink moonshine and get ready to do it again tomorrow. It felt more urban.”

The setting, Jackson, Ohio, reminded me of the decaying steel towns I roamed in Pittsburgh’s Mon Valley as a teen. Urban Blight seems more appropriate than Holler. But I started thinking about Holler as a metaphor. These people in Jackson are every bit as trapped in a dark, subterranean place as those miners. They’re not descending into the ground to extract coal and contract black lung for some mining company; they’re working in abandoned buildings, stealing scrap metal in the dark of night. It’s the same, really. And the camera work is phenomenal, showing the dark, claustrophobic work that Ruth (Jessica Barden) and her brother Blaze (Gus Halper) are engaged in, the injuries they suffer, the soul-sucking fact that there is no viable alternative to the holler they’re mired in. This is caving. This is unrelenting earth-bound gravity holding them in place. Truly a “dark hollow where the sun don’t ever shine.” Just substitute concrete and brick and mortar for trees and stones and mine-tainted streams.

Before the film, writer/director Nicole Riegel spoke to the audience, awkward at first, noting she is an introvert and prefers to be behind the camera, but warming to the task, explaining how her film came to be. Her love of the final product was infectious. Riegel scrapped her initial version of the film as the money and people around her pushed for something more like Deliverance (another upcoming film in the series) or Coal Miner’s Daughter. She doesn’t question the validity of those films. But they weren’t her experience of Appalachia. Her Appalachia was Jackson and that sorta urban blight, those decaying factories and smokestacks. Appalachia is a diversity of experiences, she told us. That’s why it’s important to have a diversity of voices telling its stories.

Riegel returned to Holler after setting it aside, blowing it up, rewriting it, and creating something so moving and visceral that it left Laura and me unable to exit the Athena  until we’d made some rudimentary attempt to process it.

Holler is a shout against crushing, generational poverty. It doesn’t judge. Even Ruth’s jailed mom (Pamela Adlon), whom Ruth judges harshly, is trapped. Her addiction isn’t as simple as a preference for partying over raising her daughter and son. The mother’s former co-worker, who visits her in prison and gives Ruth safe harbor when things go from bad to worse, tells the young woman her mother’s addiction is rooted in a work injury and a doctor who liberally prescribed opioids. The mother is using a stint in county jail as a sort of rehab, though Ruth doesn’t seem convinced it’s going to last any longer than the jail sentence. Ruth’s brother, Blaze, steps in to serve as her parent and best friend in their mother’s absence, sacrificing everything for his sister, hoping to give her the inertia she needs to be propelled out of this dark, brooding holler. Blaze suffers a vicious beating at the hands of the guy who runs the illegal scrapping operation, and that proves a christlike sacrifice, allowing the film a glimmer of hope as it concludes.

My subconscious continued mulling the film after I arrived back at Innisfree, my cabin-in-the-woods hermitage, to an ecstatic Althea bouncing around to greet me after spending the evening in the complete darkness of a power outage spawned by vicious winds that swept through after an afternoon kiss of spring. As I walked Althea earlier, before heading out to meet Laura for dinner and the movie, I caught myself looking for ramps pushing up through the leaf litter. I lingered as I passed my morel mushroom spots, hoping to spy a wrinkled head pushing up into the warm air. But “Morels Come Up In April,” as a good friend/former boss used to say repeatedly. And definitely not in January.  My drive home from the movie was a study in dodging downed tree limbs before I arrived at the dark cabin, where I indulged Althea, had a scotch in the candlelight and went to bed, where I dreamed of turbulent waters and maelstroms determined to drag everything into the depths. Still processing. Still sifting  through Holler’s wake.