I will arise and go now, and go to Innisfree,

And a small cabin build there, of clay and wattles made;

Nine bean rows will I have there, a hive for the honey bee,

And live alone in the bee-loud glade.

I’ve dreamed of living in the woods almost as long as I can remember. As a child, I’d spend countless hours in the jumble of thorn trees, crab apples and ragweed we called “The Woods.”

A year or three ago I stumbled across a 1943 book titled “Your Cabin in the Woods,” and while Conrad Meinecke’s sweet ode to simple living struck a chord deep within me, I wasn’t foolish enough to think I could build a cabin. It takes everything I have to hang a picture.

So when a cabin and cottage on 16 acres just outside Athens came available, it definitely caught my eye. Lara and I took a look and talked. A lot. The property is eclectic. The cabin is beautiful, featuring a wood stove, a magnificent fireplace and a south-facing porch that makes it feel as if you’re sitting in the forest. But overall, it’s small, with only one loft bedroom and two baths. The cottage, which has two beds and one bath, we targeted as a potential rental, and to be honest, I was fairly dismissive of it early on. After walking through the beautiful assemblage of wood that is the cabin, the cottage felt, well, pedestrian.

In the end, we decided to purchase the property, rent the cottage and use the cabin as our home in the woods. Things became confusing quickly so we decided to name each structure. Our place in Athens, which has become Lara’s primary nest, is now known as Maude’s Place, after Hal Ashby’s quirky, iconic May-December romance movie, Harold & Maude. We’re calling the cabin Innisfree, after a W.B. Yeats poem that has spoken to me since the first time I encountered it as an undergrad more than 30 years ago. And the cottage will be known as Dove Cottage, after the place William Wordsworth and his sister, Dorothy, called home in England’s Lake District. Several of the Romantic poet’s greatest works were created there.

The close on the property was uneventful, as such things go, but it took an odd twist as I left the bank and set off to Innisfree afterward. My Nissan Titan started rumbling strangely as I rolled down U.S. 33, and as I turned to exit onto 690 it was clear something was massively wrong. Perhaps my first, best clue was the large metal cylinder my truck spit up when it finally gave up the ghost. I was praying that wasn’t the transmission, though I had no idea what one would look like and whether it could fall off the bottom of a truck like this. The AAA driver who came to tow me in to Athens Auto Repair set me straight. That cylinder was my drive shaft. Fortunately, the guys at Athens Auto are awesome and honest. It cost only about 100 bucks to replace the U-joint and get my truck back on the road. 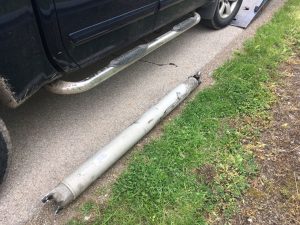 The past several days have been a blur of trips from Innisfree into Athens as we furnish and equip the cottage. One of the things that really attracted me to this property is its proximity to Athens and Maude’s Place. I can go from being in the woods to civilization (or as close as Athens gets to civilization) in 15 minutes. Some of the other places in the woods I was looking at were 30 or more minutes from Athens. That can become a real time suck, not to mention the cost of feeding my truck.

Lara and I spent the weekend here imposing order, and we got our first tastes of how magical this place is.

On Saturday night, we sat on the porch sipping mezcal during a drenching spring rainstorm. The forest surrounded us while Sunny the Sweet Pyrenees snoozed nearby and Sydney the Angry Cockatoo settled in to sleep in his cage beside us.

Of course, I insisted on sleeping here the first night we took possession, so Sunny and I set up a mattress on the floor and then sat outside to watch the forest slip into darkness. It wasn’t long before I saw the flickers of early fireflies and when I looked up, through the spreading limbs of white oaks that surround Innisfree, I could see the stars glimmering. through the newly emerged leaves.

Dove Cottage is really sweet. A friend came by on Friday to talk about building a deck at the entrance, and he was impressed, forcing me to reassess my view of Dove as an underachiever. At that point, my intent was to rent it as a regular monthly rental  but now we’re leaning toward an Air BnB setup that focuses on a spot where families and groups can gather. The driveway that descends from the ridge onto the property Y’s, with the left fork leading to Innisfree and the right to Dove. The two buildings are invisible to each other thanks to the woods and well-thought-out site design. There are a pair of lilacs beside Dove, a grove of poplars out back, a large grassy area where a tent or two could be pitched, and a fire pit. A riot of daffodils fills the front yard. And the grassy area beside Dove yields to a tongue of forest that rolls gently down into a hollow. There’s a massive white oak back there, the largest I’ve seen on the property so far, and I think with a little trail building it can be a truly magical space.

The nits? Well, the previous owner — who had lived here since 1974 — is a diminutive man. While the design of the cabin is incredible, there are several spaces where low clearance make me feel like an ocean freighter trying to negotiate a creek. I’ve smacked my head several times already and have learned not to wear baseball caps indoors (the bill of the cap hides overhead threats). I’m sure I’ll find more negatives as I go, but as I sit here on a Monday morning gushing about Innisfree, I’m confident those negatives will be minor.

And the biggest upside? I’m writing again, something I really haven’t done since returning from Costa Rica last fall.

One reply on “Our cabin in the woods”