One of the many advantages to living in southeast Ohio is being neighbors with Jorma Kaukonen, the guitarist who fueled the musical explorations of Jefferson Airplane and Hot Tuna. He and his wife, Vanessa, created an oasis about 20 miles outside Athens that they’ve dubbed Fur Peace Ranch.

The ranch is mostly a guitar camp, which draws incredible guitarists to town to serve as instructors. This results in great shows at their intimate concert venue (a few hundred seats, at most). They also boast the Psylodelic Gallery, a collection of ’60s art and memorabilia that’s in silo. 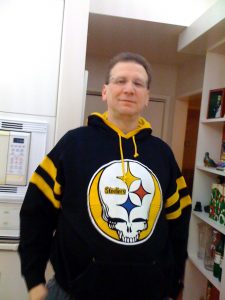 But it’s their most recent endeavor that prompted me to jump in the car on a 10-degree day and drive out there: Pho Peace Ranch. Apparently, Jorma is a pho fanatic. Me too. On Wednesdays and Thursdays, the ranch offers chicken, beef or vegetable pho out of its kitchen. I had the beef. Lara the chicken. Great stuff. Even better: Jorma and the incredible John Hurl serenaded us during lunch.

As a side note, I was wearing my favorite Steelers Your Face hoodie, and Vanessa instantly booed me, just as she had when she spotted me wearing the hoodie during a show about a year ago. I assumed she was a hapless Browns fan, but she’s a Patriots fan. We talked football a bit during lunch, and she confided that Jorma roots for the Steelers.

Another reason to love this place.