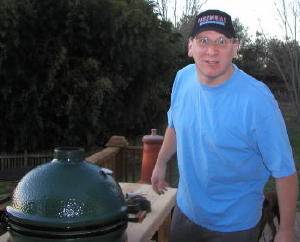 I have two new toys in my playpen.

The first is the Big Green Egg. 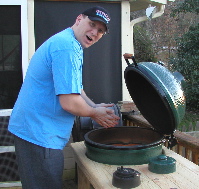 It’s a very cool charcoal grill/smoker. I’ve been playing with it non-stop for about a week and am totally impressed. When I first started reading about it, I thought there was a lot of hype infused in the descriptions and that this humble egg couldn’t possible live up to egg-spectations. It has. And more. The natural charcoal lasts a long time, as promised, And meat tends to emerge from the grill with egg-squisite moistness (OK. I’ll stop talking like Vincent Price/Egghead in a Batman episode.)

— The second toy is a Mac G4 Powerbook. We have a Dell laptop and docking station that we were using for our home computer. But it just wasn’t fun to use. I’ve been hearing so much about OS X that I decided to give it a whirl. So far, I’m impressed. Mac isn’t the promised land. I’ve spent more than a few hours hooking things up and getting my Airport wireless connection to work with the PCs in our house and, most importantly, with Tivo. But now we’re turning the corner. I remember the first time I saw a Mac. It was in the art department at the Birmingham Post-Herald in 1986 or ’87. I think it was a Mac SE. And we were mesmerized by it as our staff artist put it through its paces. At the time, I was using an Amstrad word processor at home. The Mac really impressed me, and by the time we moved to Albuquerque, I bought the first of two or three Macs that I owned before jumping to PC, mostly to be compatible with the rest of the world. The G4 is very cool on the compatibility front. Most of the setup problems I’ve been having are related to the PCs. OS X is fast and user friendly, as advertised. We got the 12-inch PowerBook and a 20 inch cinema display. Que bonita.