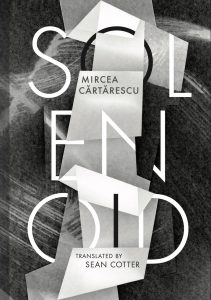 After reading multiple rave reviews of Mircea Cărtărescu’s Solenoid on social media, I finally broke down and purchased a copy. I’m only a hundred pages in, but it is exceeding the hype. Sean Cotter’s translation is fantastic (though I can’t speak to how true it is to the original Romanian).

Some of what I read about the book while I was sniffing around trying to decide if I wanted to bounce its 638 pages around in my brain for the next several weeks seemed over the top. One podcast describes it as the “greatest surrealist novel ever written” while one of the blurbs on the back of the novel gushes:

“If Handke and Knausgaard dropped acid together in a Bucharest exterminator’s abandoned shop with only Kafka’s Metamorphosis for company, this is the sort of autofiction their combined brain might then produce. A fractal-shattered shaker of Pan Galactic Gargle Blaster straight to the dome of twenty-first-century letters.”

Um, OK. What the hell. I decided to throw the dice. After the first few chapters, I started slowing myself down, taking the time to make notes and explore some of the ideas (and vocabulary) that were new to me. I’ll be at this for a while, but it won’t be a slog. Solenoid is very readable despite being a dense novel of ideas.

“Maybe the game is won by the person who suddenly understands its absurdity and throws it to the ground, the one who cuts through the knot while everyone else is trying to unravel it.”