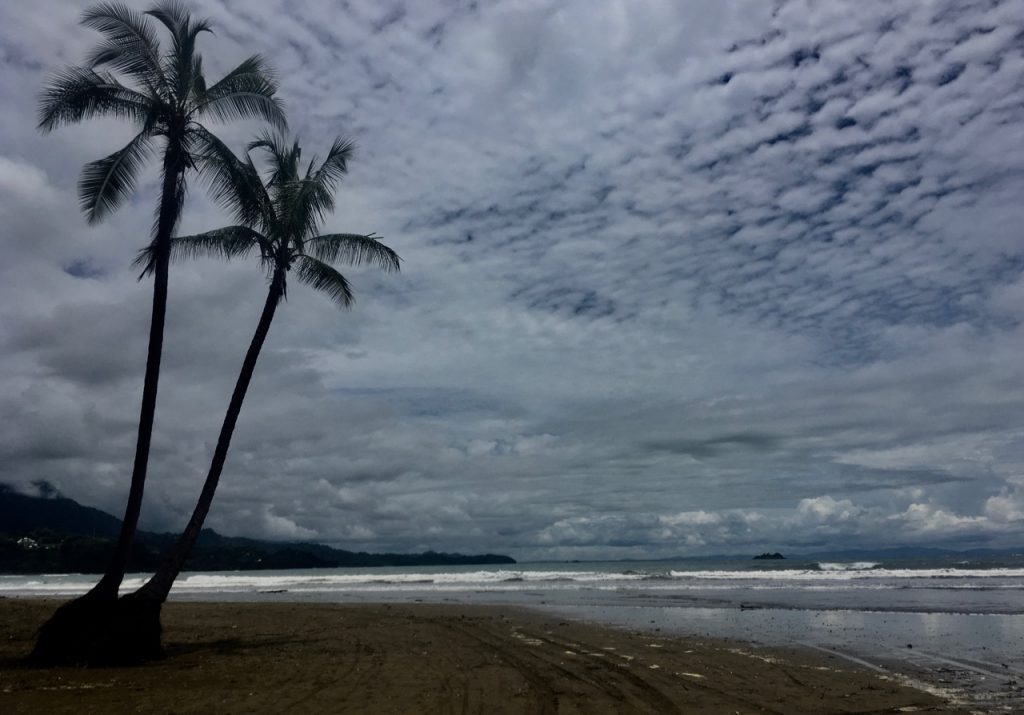 After a few phone calls back the the States yesterday, I decided to take a walk on the beach. I’ve been avoiding the beach on weekends because I figured it would be more crowded with tourists. And one of my favorite things about Ballena National Marine Park is the solitude it offers most days.

Turns out, there’s something to be said for crowds.

At the Playa Colonia entrance, several vendors were selling ice cream and I noticed a lot more people in the area as I paid my $6 U.S. entry fee. Normally when I arrive, it’s just me and the worker who collects money.

Today, there were Ticos everywhere. Some where local. Some come from other parts of Costa Rica to vacation on the beach. This is the Whale and Dolphin Festival, which runs Sept. 7-16, so that drew even more people. (Ballena is Spanish for whale.)

I saw very few Gringos as I walked. I noticed the tide was coming up and checked the tide chart I’d downloaded on my phone, so I knew I had a few hours till high tide. As I stepped carefully to dodge shell fragments, coconut husks and the occasional rock, I saw people flying kites, children splashing in the surf, dogs chasing each other, young couples … it was a cross-section of Tico society playing in the sand.

At the beach near the main park entrance, there were about a dozen boats loading and offloading customers for whale and dolphin tours. I love watching the mates as they stand in knee-deep water, steadying the boat and keeping the bow pointed into the surf as they wait for the right moment to launch. After a wave crashes past, the mates push off, the captain trims the outboard down and a rooster tail of water erupts, propelling the boat into the surf and on toward the whales. I always worry one of the mates will get mangled in the outboard prop as it screams to life, but they step aside like nautical bullfighters.

At that point, the tide already was too high to venture out onto the tail of the whale, so I tracked south, toward Playa Hermosa. The crowds thinned quickly and after several hundred yards I found a stretch of beach with a population of three: me, a gray-headed kite and a white ibis, who was scurrying frenetically from one crab hole to another, trusting his beak deep inside to try to catch its occupant by surprise. When the ibis drifted too close to the kite, the raptor took umbrage, leaping into the air and herding it away. The kite was just hanging out on the beach, like me, not really hunting for anything in particular. After a while, he flew off into the jungle that ran right up to the beach. 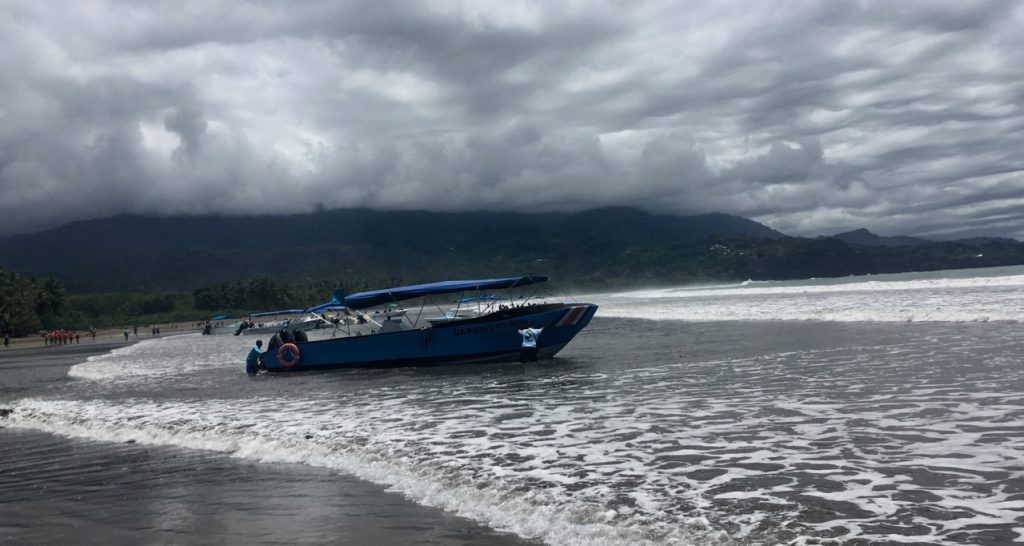 At this point, a pair of young men approached. I greeted them in Spanish, as I always do, and they made the mistake of thinking I speak the language, unleashing a gatling gun of words at me.

“Lo siento. No hablo español bien,” I stammered. I could tell they were official. Each was wearing an ID badge.

He told me it was time to start heading back south, back to the other side of the point where Rio Uvita flows into the sea. Otherwise, I’d be cut off and spend a few hours on the edge of the jungle waiting for the tide to go out.

“The tide is coming up fast,” he said.

And that was true. I walked back the way I came, and when I crossed Rio Uvita where it flows into the sea, the water was almost waist deep. It had been ankle deep on my way out. I also saw several people lying on the beach who were caught unaware as an early-bird wave swept in, swamping their towels and coolers.

At this point, I started re-evaluating my frustration with the $6 park entry fee (Ticos pay a $2 fee). I don’t mind paying, but if you go to the beach every day, well, it adds up. I’d found a way to dodge the toll at an unguarded beach access near Flutterby House, but with the festival happening a toll collector has been stationed there, too.

Now, I’m happy to pay the toll. The guys who approached were good-natured and professional, and the park is an incredible resource. There are regular police patrols in the area and Playa Colonia has bathrooms and basic shower facilities. When I think of the crap I spend 6 bucks on, it’s a bargain.

My most sublime moment of the walk came as I arrived back at Playa Colonia. I walked up off the beach, past a couple who had dug a trough where their toddler was lying while they covered him with sand. The little guy couldn’t have been more than 18 months and had the most beatific smile I’ve ever seen on a child. It was infectious. I grinned the whole way home.

Clouds crept in as sunset approached, but I walked up to the shack hoping they’d hold off just long enough. And they did, treating me to a rainbow over the jungle and a brilliant sunset. Great end to another day in paradise. 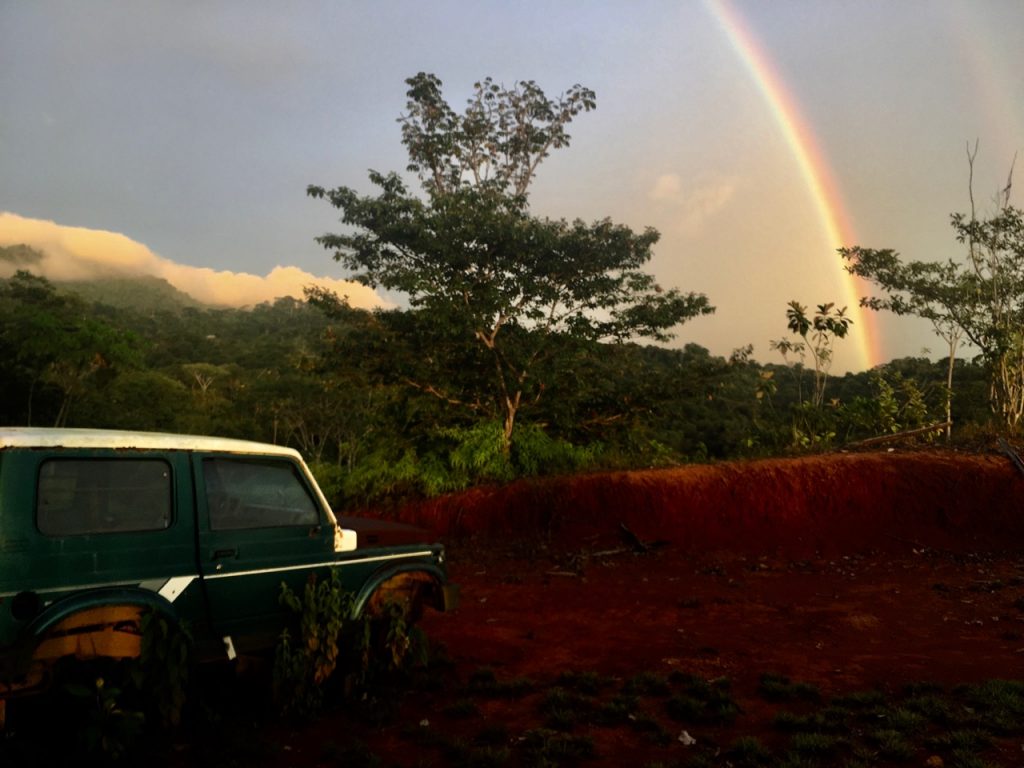